The first variation of sake that is found in the books is called “Kuchikami no sake”. This technique of rice chewing was the first of its kind and created the ancestor of Sake.  In 689 the First Sake Brewery is officially registered and will be mostly till the 11th – 12th century used as a shrine ritual (like we see also with beer and wine in pagan and Christian rituals) It was always freshly made because the shelf life wasn’t optimal. The reason why we associate saké with a warm drink comes from that poor shelf life. Old, or turn bad sake would be heated so it could be served a day or two longer. Long before Pasteur invented his technique, the Japanese were using from the16th century and onwards a Pasteurization-like technique. From there on the quality of the Saké kept on going forwards, till in the 20th century the technique for making Junmai Saké was perfected. Those are the Sakés we are going to drink today.

While Wine and it’s process of turning sugars into alcohol or Beer that uses yeast and malting to start the fermentation have created some sophisticated techniques to create fine beverages, nothing compares to the labour intensive and complex production process that is Sake 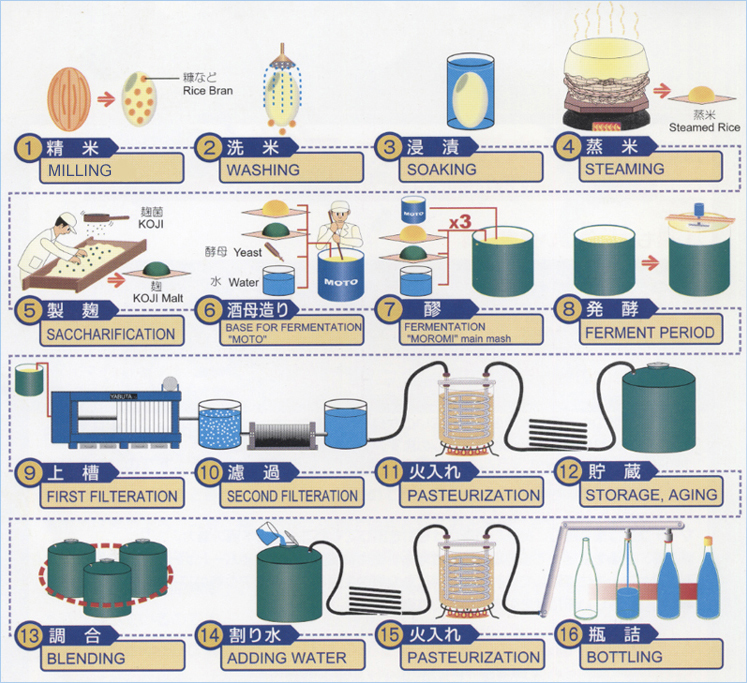 Even if Junmai sake contains only water, yeast and rice, every of these ingredients have a particular importance toward the delicate bouquet that will be created at the end.

Rice: there is a special type of Sake rice used in most premium sake. Closer to the beer tradition then the wine: this main ingredient is not often produced by the Kura itself, but outsourced to special farms in the near region

Water: Sake is made with 80% of water, and while being quite delicate in taste the hardness of the water can intertwine with a lot of the flavours of the sake. There is that rule: where’s a sake brewery there is good water, and often it’s true. Without qualitative water no sake brewery could survive as long.

Yeast: Without yeast, there is no sake. Yeast eats the sugars produced when enzymes from the koji chop up the starch in the rice and gives off alcohol and carbon dioxide in return. Yeast has quite a profound effect on the final fragrance and flavour of a sake. The various acids produced differ from yeast to yeast and this will lead to different aromas, tastes and textures.

Ichi: Koji, Ni: moto, san: Zukuri
First the Koji then the yeast starter and finally the fermentation.
After creating the Koji (for around 30% of the rice used in a Sake production), a small container is prepared with the yeast starter, this to help them survive other bacteria. Combined with the Koji that is breaking down the sugars in the rice this created the perfect environment for a fermentation starter. The Moto is then transferred to a larger vat where rice, Koji and water is added three times to created the perfect balance that will become the Sake base.

Now we just need to fulfil three more steps and we almost have Sake! Pressing, filtering and pasteurization are the last steps that can be done to create the Sake you want. Playing with these parameters will give you other types of sake.

Junmai VS Non Junmai: the first main difference we have to make is between Junmai and non-junmai (a.k.a Honjozo), The first one has to be seen as the pure form where the second one has been added with some pure distilled alcohol within the brewing process.
Gingo: More then just a separate classification, is a separate world. Essentially a ginjo designated sake is one for which the rice used in brewing has a seimaibuai of at least 60%, which again means that no more than 60 percent of the original size of the grains remains after milling. Daigingo is again a subclass where the seimaibuai is a minimum of 50 percent and often can be as mch as 35%.

Go-Mi: The five representative flavors that are sometimes used as a framework for assessing sake: Sanmi (acidity), amami (sweetness), karami (dryness or spicyness), shibumi (astringency or tartness) and nigami (bitterness)
Kimoto: Traditional method of brewing that fosters the production of lactic acid to aid the proliferation of yeast; it requires tedious pole-mixing by hand.
Koji: Aspergillus Oryzae, a mold sprinkled on rice that helps convert the rice’s starch into the sugar, the yeast used in fermentation
Kura: Sake brewery, short for sakagura
Masu: drinking vessel made of crytopmeria wood; traditionally a rice- measuring scoop
Toji: Master brewer

This small-scale brewery is starting to get a lot of attention in the sake world. Located in the central Niigata prefecture, they concentrate their small brews on quality by using an own sort of yeast instead of buying it at the brewers’ association like the majority of kura.

Dewazakura began to market Ginjo* Sake, named Oka Ginjo, in 1980, the first attempt of its kind for sake breweries. Back then, Ginjo was mainly made for completion and the word “Ginjo” was rarely known; only those involved in sake brewing were familiar with the word. However, they wanted everyone to enjoy Ginjo so they decided to sell Ginjo for an affordable price for the public. Oka Ginjo was well received, triggering the so-called “Ginjo boom.”

This saké is made using the labor-intesnive kimoto method of creating moto, yeast starter, something this kura excels at. The overall impression is definitely dry and clean, but there are layers of hidden flavour elements waiting to be discovered. Hatsumago is well known for consistency of quality as evident by teir remarkable ability to win a gold medal almost evert single year in the new sake tasting competition

Founded in 1819 this brewery had a less known existence till their revival in the1980’s  becoming the biggest Japanese “craft success” in the sake industry. Through their love of seimaibuai they become one of the highest-ranking premium sakes in Japan. The number behind their name refers to the polishing rate of their rice